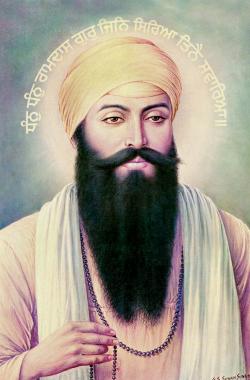 Gurusahay and Mukta Khalsa practice Sikh Dharma, a religion which comes originally from India. Sikh means someone who is a seeker, a student. In our religion, there were ten holy people called Gurus. The word Guru comes from the roots “Gu” which means darkness, and “Ru” which means light. So, a Guru is someone who can reveal infinity to you, who takes you from darkness to light, who leads and pushes you to enlightenment.

The fourth of the ten Gurus was a man named Guru Ram Das. He was renowned for his humility, his selfless service, his devotional prayer, and his great healing abilities. Guru Ram Das is my personal Guru, and I have named not only this site in his honor but also my healing practice, the GRD Healing Arts Clinic, after him.

The story is told that when Guru Ram Das was alive, people would travel from all over India to obtain his Darshan, his blessing. The journey was called a Yatra, a spiritual undertaking, and spiritual discipline. A Yatra requires great devotion and sacrifice–you would stop work during the time of the trip, you would be tested all along the way. (In today’s terms, the hotel reservations being canceled, the gas would run out in the car, the engine would break down, you would get sick.) Each test would hopefully remind you that you are a spirit with a body, not a body with a spirit. What that means is that each test and trial would only be placed there by God and Guru to strengthen your devotion and determination to get to the Guru, to the source of spiritual wisdom.

When travelers would finally arrive in Amritsar, Guru Ram Das’s home, after their long journey, they would be met by a very humble man who would escort them to sleeping quarters, be sure they were fed, and who would massage their feet in an attempt to soothe the journey’s pain away. He would promise them that in the morning they would have the Guru’s Darshan and their inner prayers and outer quest would be fulfilled.

The Guru’s disciples would get up in the morning, they would dress themselves in their finest clothes, and do extra meditations to cleanse their mind of the mundane so as to open themselves to the bounty and blessing of the Guru’s words. When at last they were presented to the Guru, they would be shocked to realize that the humble servant who took care of them the night before was Guru Ram Das himself, his selfless service their first lesson!